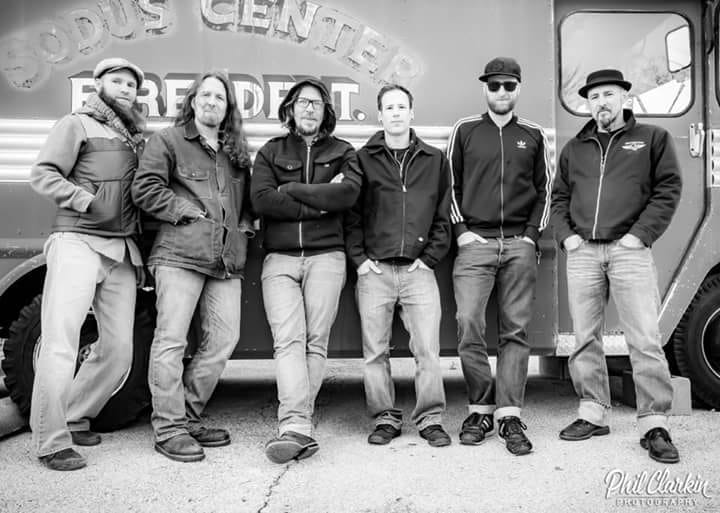 It’s our Four Year Anniversary and of course we’re gonna dance with the one who brought us! Honored to have Dirtfoot back in the house!

“Here’s their deal: Imagine Nick Cave on a bed of rusty nails, the cover of “Gin and Juice” often mis-attributed to Phish (it was actually the Gourds), some old-timey “Dem Bones,” Old Crow Medicine show culture-clash, and that subtle fecal stench of Mr. Bungle skronk sax craziness: Get theses elements, let them stew in an oaken barrel for a number of years and out comes Shreveport, Louisiana’s Dirtfoot.” – Spencer, Synthesis.net

Whether performing on big stages at festivals, or playing intimate setting in pubs and the finer taverns all over the mid west & south, Dirtfoot puts on an uproarious show. The crowds come to take part in the fun and chaos, hollering to all the calls and responses, shaking their beancans, and getting down with the infectious grooves. There is only one Gypsy Punk Country Grumble Boogie band in the landï¿½ Dirtfoot.

Eight years ago, a tornado blew through Shreveport and Matt was standing on his porch, shortly after a tree decided to test the landlord’s homeowner’s policy. J walking by, initiated conversation and amidst cracked countertops and scattered shingles, the two musicians became friends.

It’s more than a bit ironic that a powerful, hard-to-predict weather system marks the creation of Dirtfoot. Their music can be as dizzying as a twister, volatile and uproarious.

It is their lack of restraint, their raw musical impulsiveness and high energy delivery that can be so arresting to the people who have heard them play. They stomp their feet. Matt makes primal noises and intentionally mumbles his lyrics. They let otherwise well-rehearsed songs meander off the beaten path, or right off an auditory cliff, its finale laughably lost, the structure sacrificed for the sheer playfulness of it all.

The members of Dirtfoot seem to all secretly delight in how different they are, in how something so oddball and outlandish can still be appreciated, if not entirely understood.

This band has a truly engaging and eclectic sound! They are a delicious, spicy, dirty band that will make you stomp your feet, shake your ass and yell like a lunatic on a full moon night.