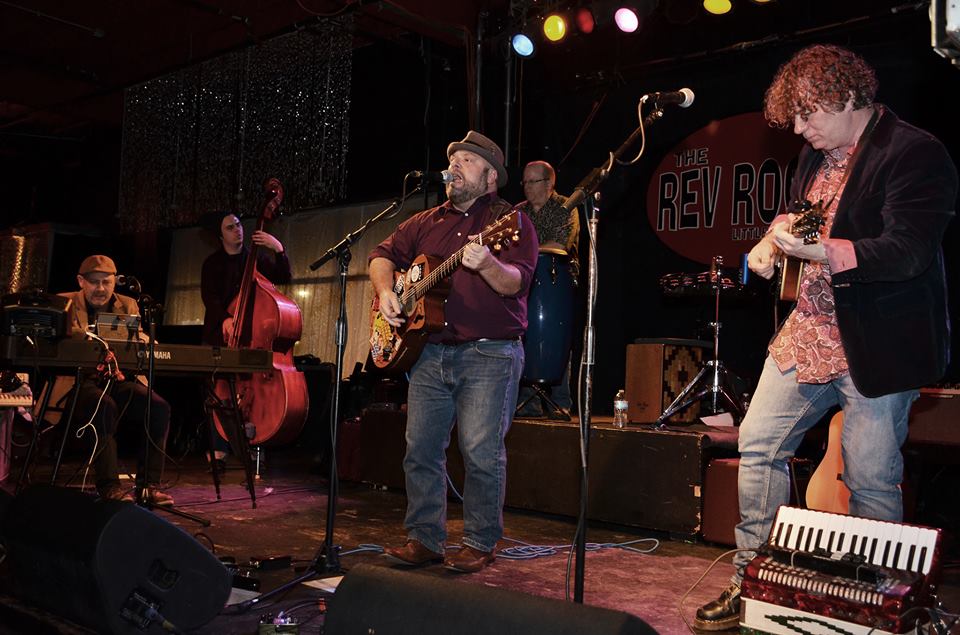 Big Red Flag is a modern-day purveyor of Ragtime Gypsy Grass. Big Red Flag can’t be neatly pigeon holed into one genre or category. The one defining element of their music is that it’s all done on acoustic instruments: guitars, mandolin, banjo, piano, acoustic bass, accordions, and a variety of clever percussion accoutrements. Pure, organic and honest, without the myriad effects and affectations of so many performing acts today. Big Red Flag’s sound is the same, whether on the stage or on the street corner.
While their focus is on playing their own handcrafted, artisanal ditties, they draw on a wide variety of influences: Olde World Eastern European traditionals, Irish drinking songs, waltzes, tangos and polkas, Latin jazz, and a fair nod to Tom Waits, Gogol Bordello, Scott Joplin and the Pogues.
Big Red Flag is comprised of veteran musicians who have performed, not only all around their home state of Arkansas, but in the pubs and streets of Ireland and all over the South Korean peninsula, among other semi-exotic locales. Outside of Big Red Flag, the fellas have honed their craft in genre-specific bands performing Irish punk, Western pop, blues, alt-country, funk, surf and straight-up rock ‘n roll.
Big Red Flag’s all-acoustic orchestrations will delight your ears, lift your spirits and tickle your funny bone. Their irreverent, original, high-energy ditties are entertaining, compelling and bound to make you clap or sing along. Join Big Red Flag for a jaunt through seedy cabarets, eastern European gypsy camps and apocalyptic nightmares. A grand time!